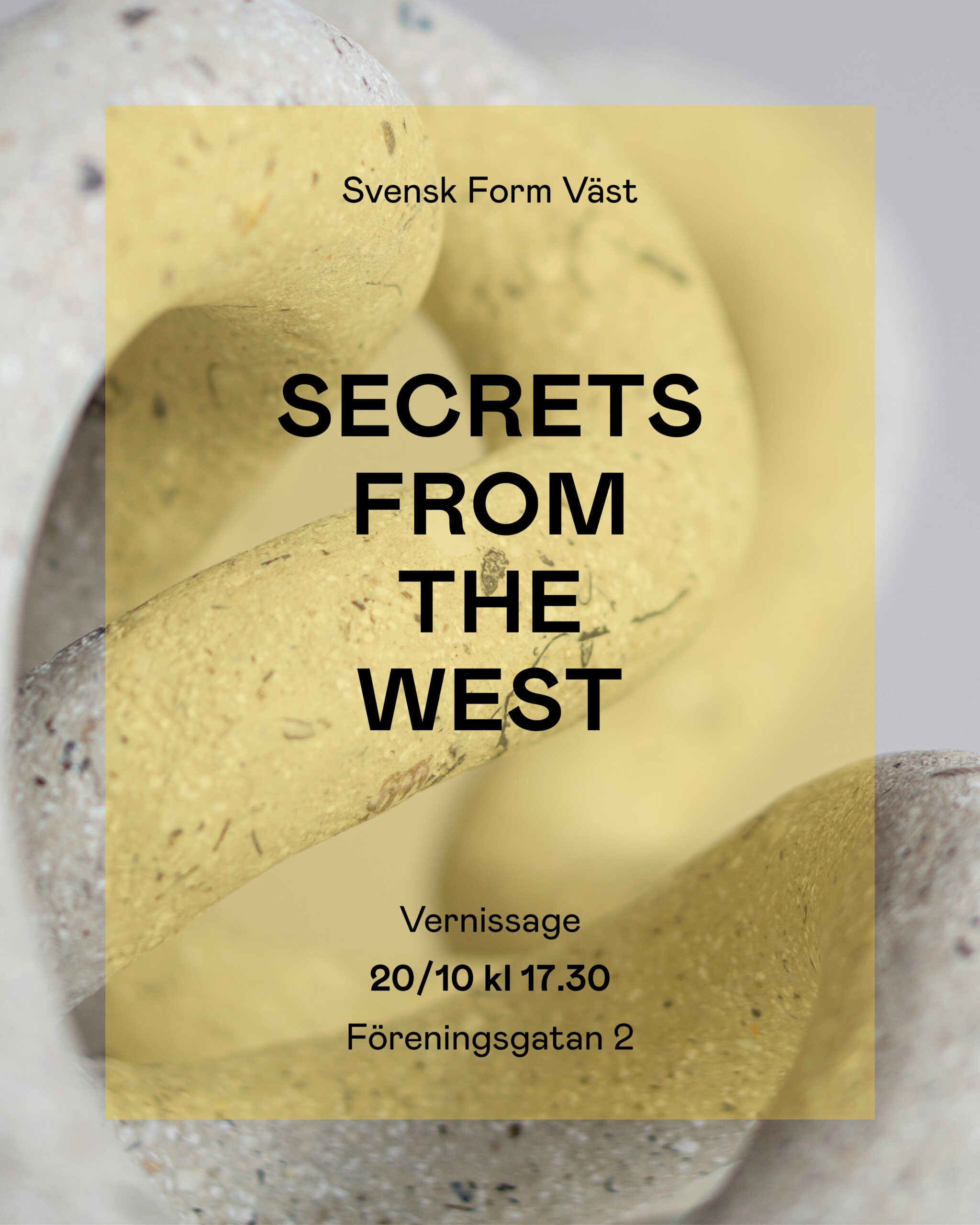 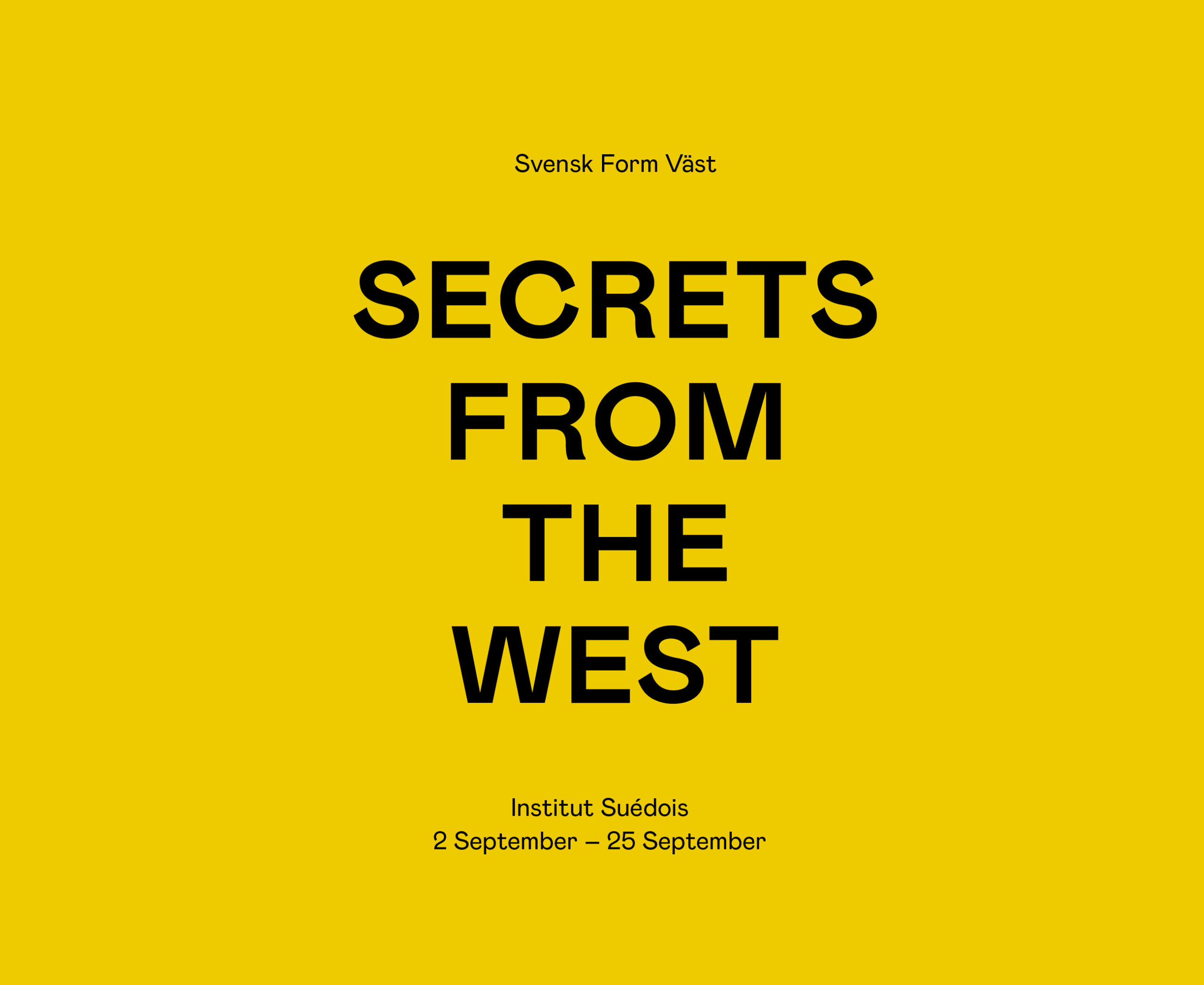 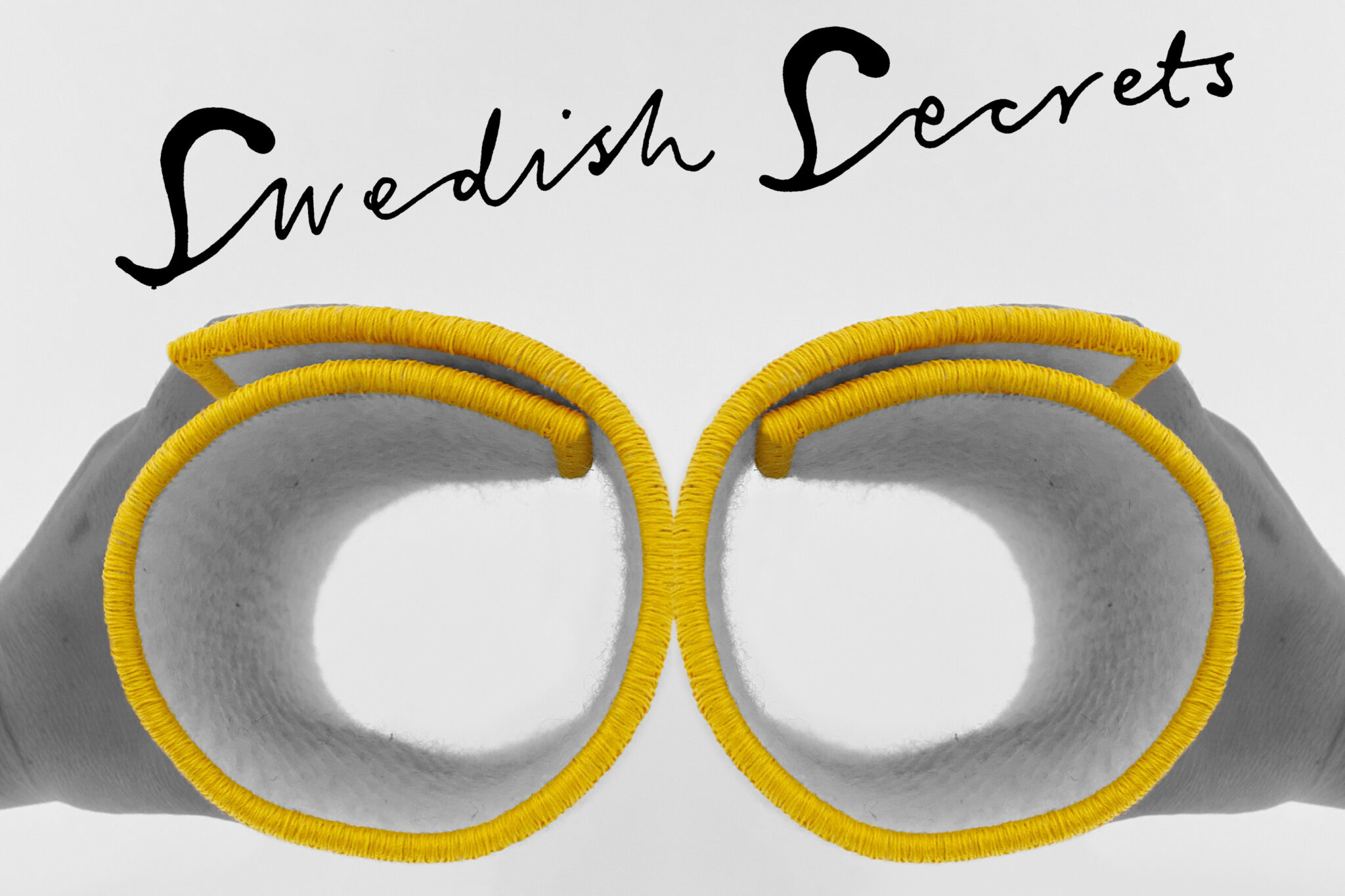 SECRETS FROM THE WEST
Svensk Form Väst invites you to take part in a diverse world of design from western Sweden. Furniture, textiles, lighting, product design, sculptures and new innovative materials will be exhibited.

Side by side, you will find works from established design veterans and passionate new graduates. These designers, in their own curious, poetic and innovative ways reflect the craft, industry, environment and optimism of western Sweden.

Get a glimpse into the personal relationship each designer has with their work and the place where their work is done. As they reveal the inspirations and considerations behind each object, they also hope to inspire you to take part in shaping a sustainable future for us all.

Influenced by western Sweden
Everything around us moves and affects us. For designers, this is particularly important to consider: In what way does our habitat affect what we create? In the details of these designs and through the narration of the designers, one can find clues to how western Sweden has influenced the goals, shapes, materials and construction of these works. Come, observe, and discover Secrets from the West. 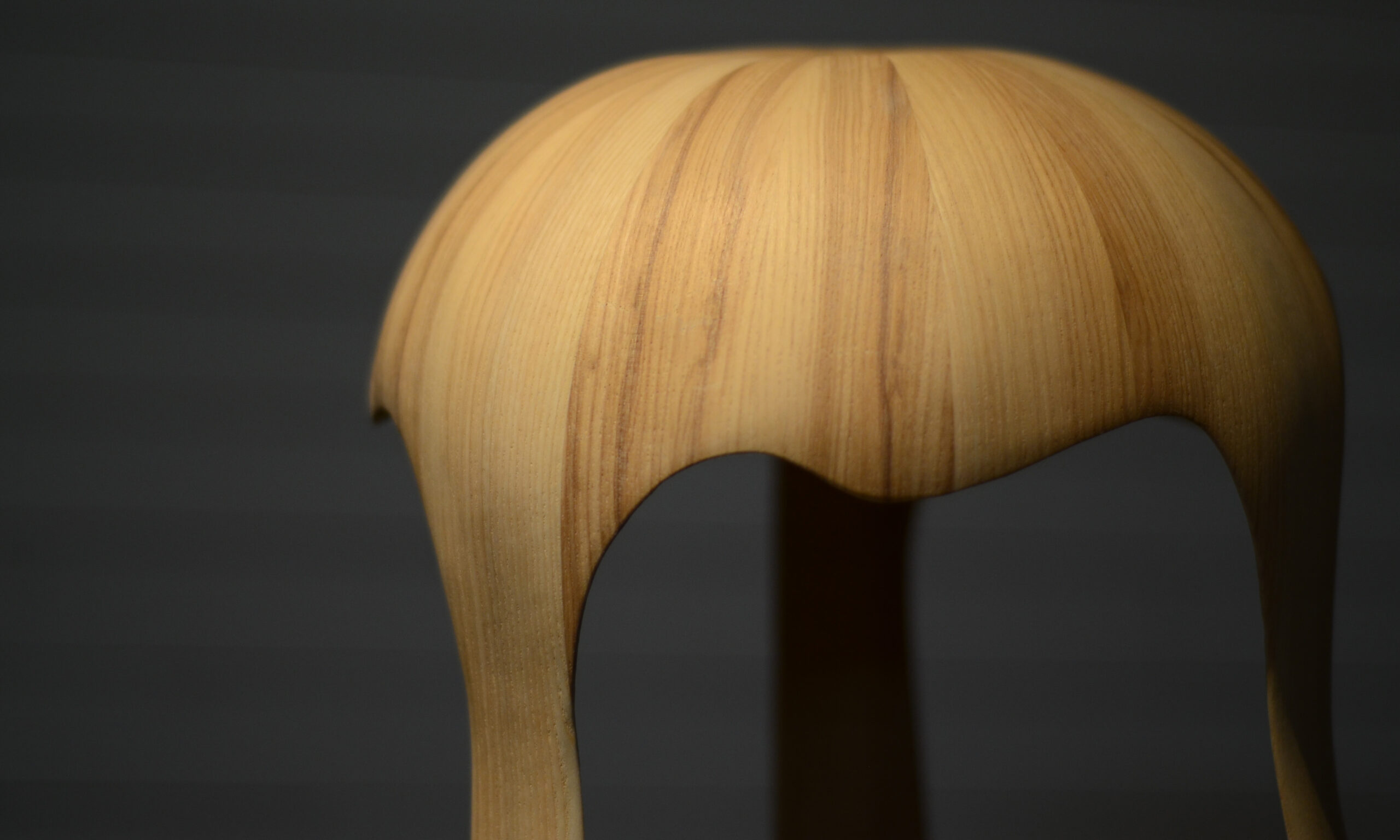 Rob Curran
Outside Material
My main practice is in steam bending wood over a hot iron. A technique used, for example, in violin and guitar making. Unrestricted by time, this technique allows for an intimate dialogue between the maker and the material. The material reflects the effort
of the maker as it yields to the heat and takes its applied form. It is always challenging but extremely rewarding when the elements of my work come to- gether – relying on head, hand and the reciprocating response of the material. Through my work and this technique I hope to challenge the viewers percep- tion of material, volume and space.
@aleatory_reflex   www.rob-curran.com 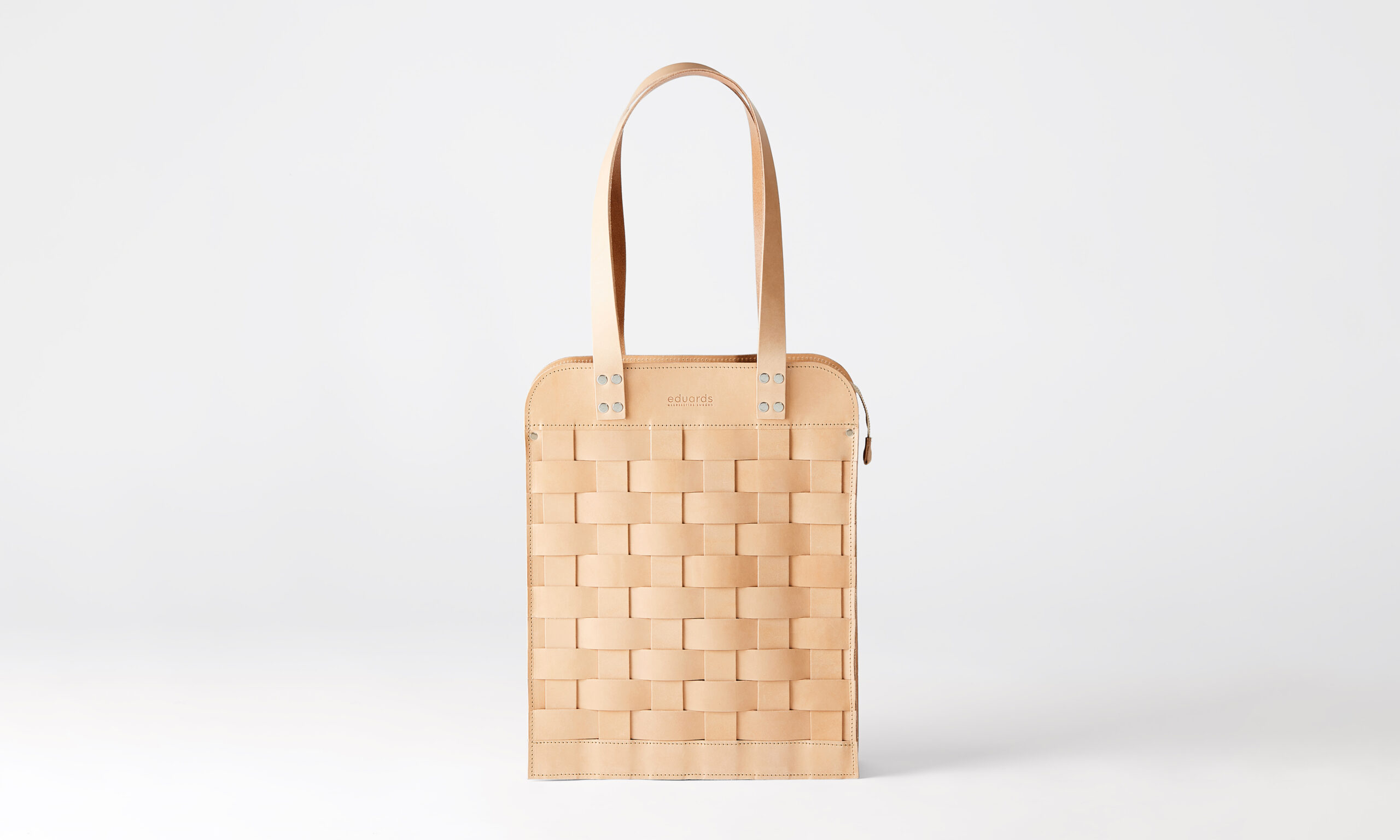 Cecilia Eduards
Big Shoulder Bag
”As an architect, I’m trained to design buildings with a time-perspective of 100 years. On this design idea, I started Eduards Accessories Sweden.”
Sprung from the field of architecture, Cecilia Eduards creates bags and accessories designed with care.
To Eduards, sustainable fashion is based on three factors; long-term design, sustainable materials and ethical production. All items are made in Sweden out of vegetable tanned leather, a natural material that ages with grace. Striving to create items to be loved and carried over time she only follows one design rule – keep it simple.
@eduardsaccessories   www.eduardsaccessories.se 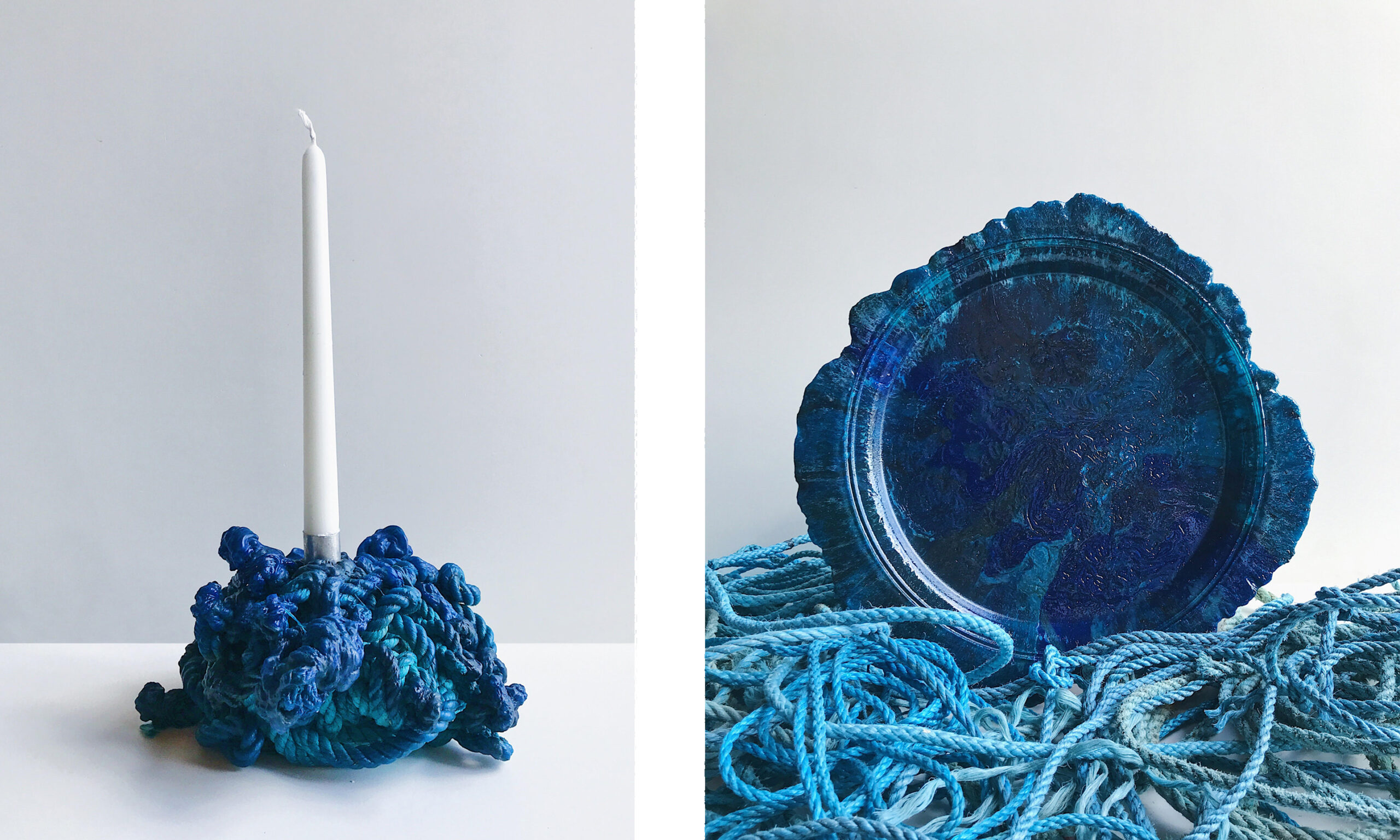 Emily-Claire and Erik Goksøyr
Out of Ocean
Architect duo Emily-Claire and Erik Goksøyr live in Hunnebostrand with the ocean and plastic as neighbors. In 2016, the idea was formed to combine design with material research of ocean plastics from the Swedish west coast, intending to create value from the waste. Through experimental material design, an interest emerged in creating products in which the user can recognize the recycled artifacts that the object is composed of, retaining part of the object’s material history. Each tray and candle holder is unique and imperfect, just like the objects that float ashore. The couple also run a research project where they have developed a facade material for the construction industry.
@outofoceanplastic   www.outofocean.com 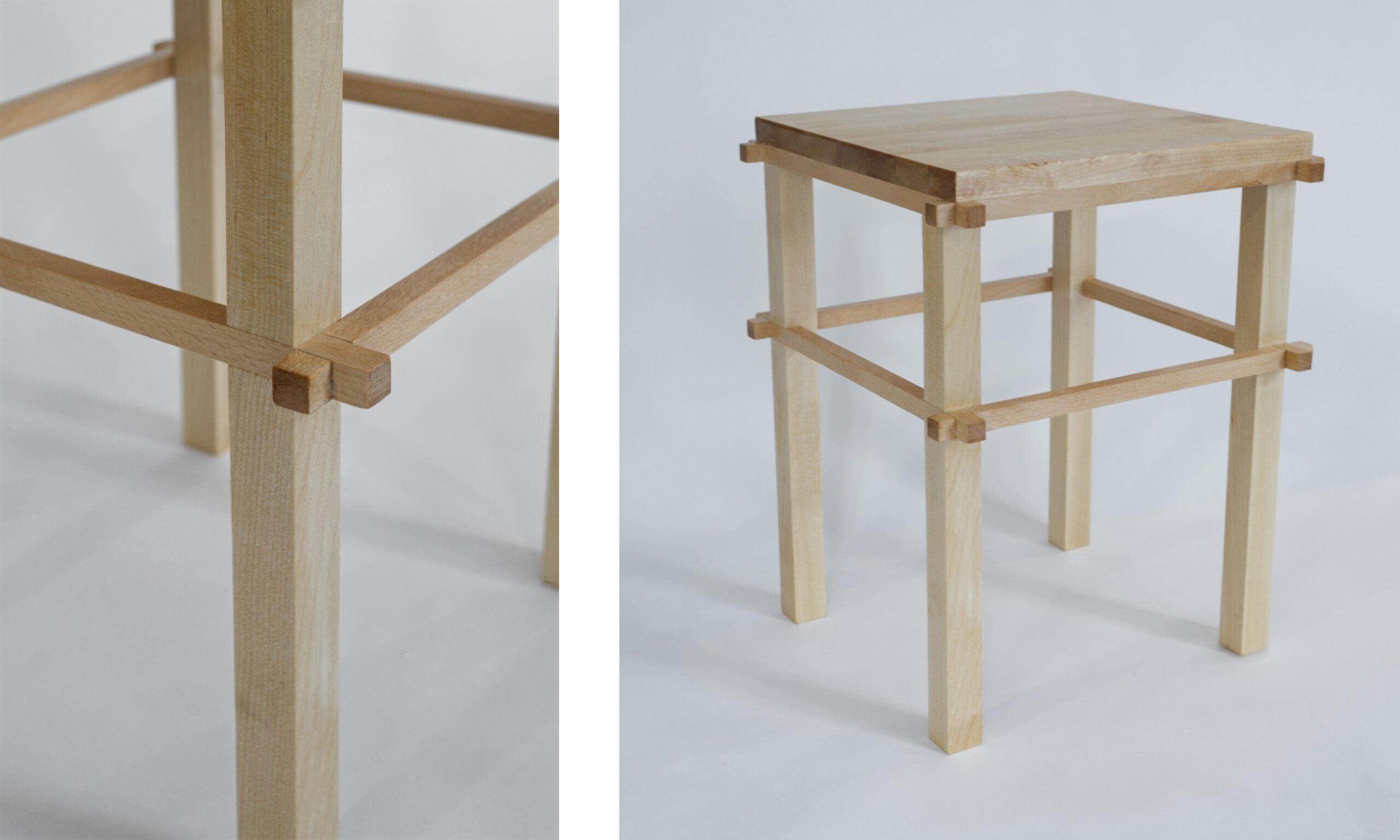 Esbjörn Grip
Joinery Pall
Esbjörn Grip is a Gothenburg based designer that works with furniture, drawing and spaces, using wood as his main medium. The work encompasses single objects as well as larger environments, with the understated results aiming to provide the objects with a timeless and expressive look. The furniture can have both sculptural and traditional attributes. Natural imperfections and beauty marks are embraced in the finished pieces as parts of an honest expression. @esbjorngrip e_grip   www.esbjorngrip.com 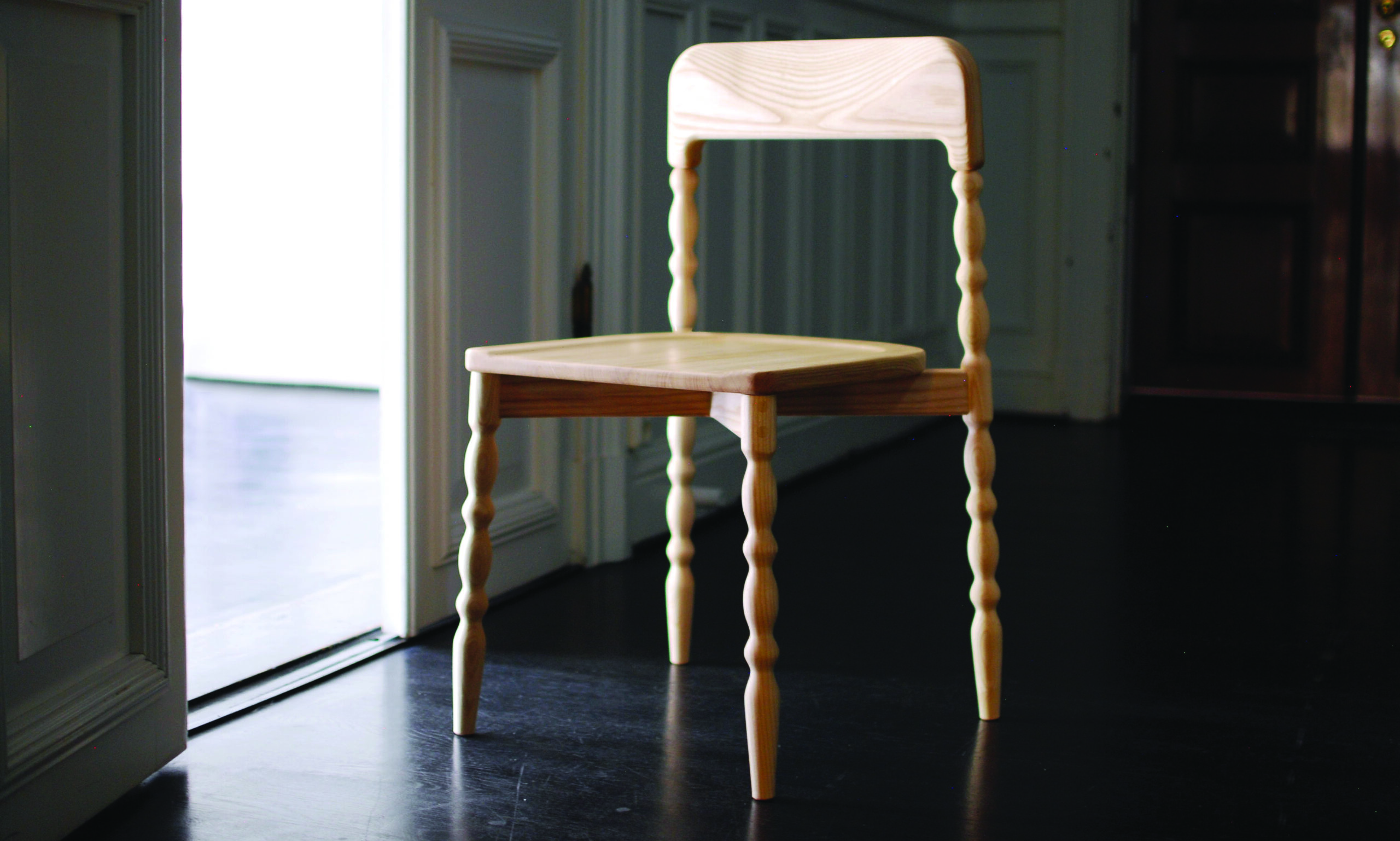 Matilda Hunyadi
Bacatus / Allium
The decorative elements of my furniture serve an important purpose – to tell stories and inspire fantasy. My process begins with elements of traditional design and folk art. These elements are abstracted from their context and redefined as contemporary furniture produced under my brand SLOYDLAB.
The Bacatus chair echoes the traditional turned leg, and the form is inspired by a small wooden necklace that my grandmother gave me. Allium on the other hand flirts with the voluptuous shapes of flower bulbs from the art nouveau period.
@sloydlab   www.sloydlab.com 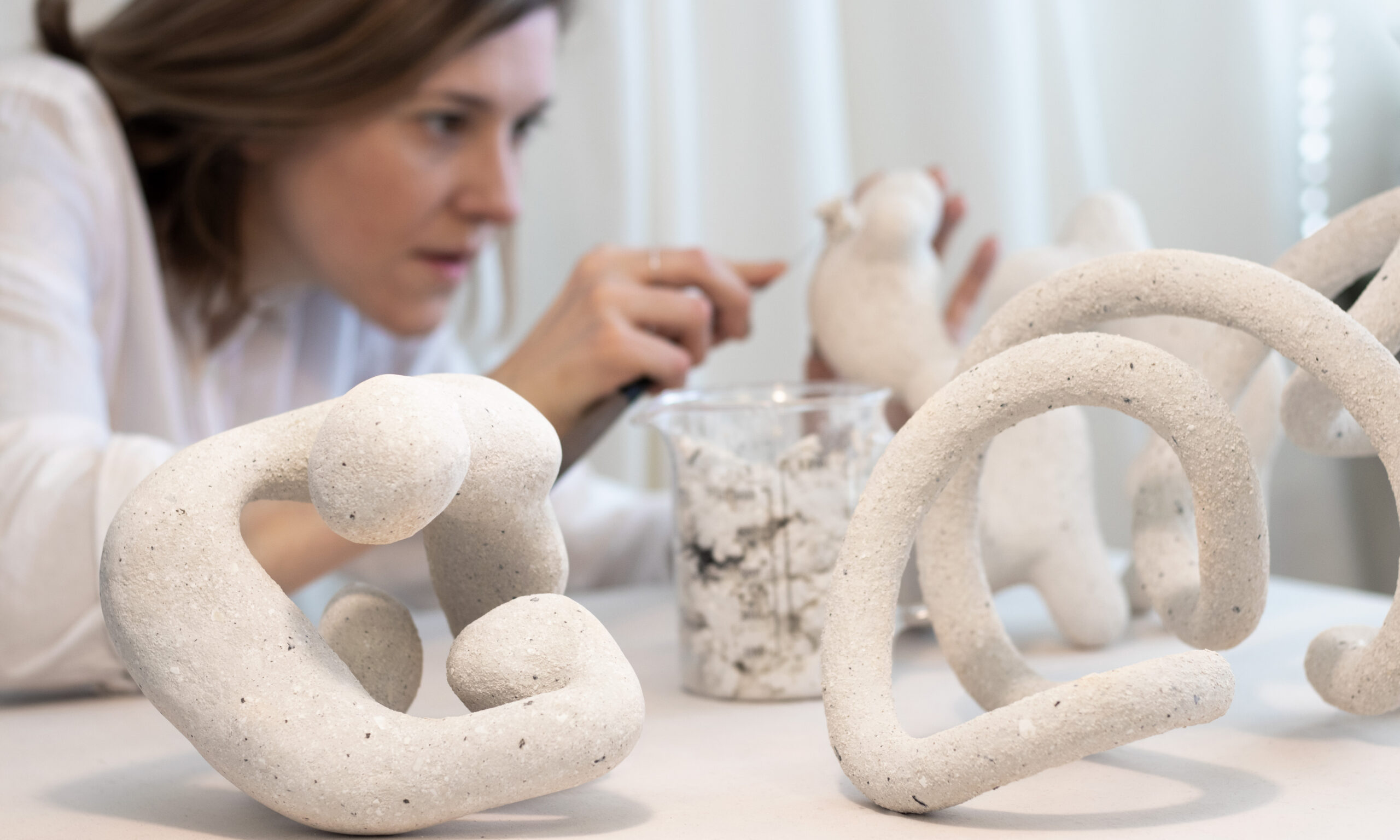 Emeli Höcks
Circular
Emeli sees it as a responsibility of artists to con- stantly search for new and better ways of working and acting as humans on the planet and to use her design practice to reward nature instead of ruin it. Based on this belief she is creating her own materials, purely made from biodegradable and local waste from the western coast of Sweden; such as paper, seaweed, charcoal, coffee grounds, and eggshells. This material provides a basis for the design and production of unique and handmade objects.
Today ́s waste can be tomorrow’s raw material, because, isn’t waste only waste if we waste it?
@emelihocks   www.emelihocks.com 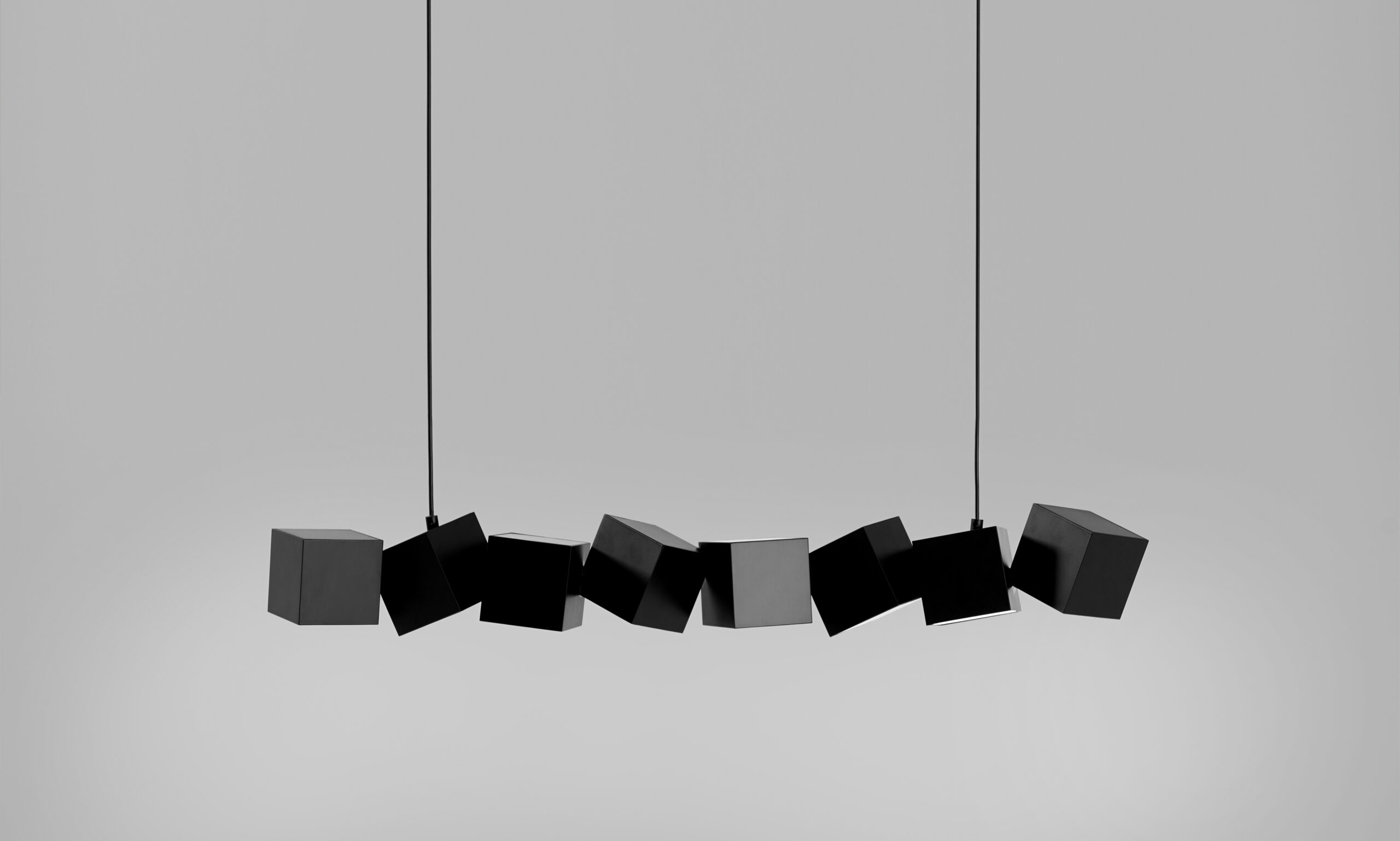 Markus Johansson
Blockchain
The Blockchain pendant, designed for Oblure, consists of eight cubes that appear to be placed at random. A single cube traveling through time and space – rendering a sequence of positions before the beholder. But there is order in chaos. Every second cube has a LED panel designed and directed to spread even light. The cubes form an angular silhou- ette that seemingly floats in the air.
Markus Johansson design studio is located in central Gothenburg. Our vision is to combine construction, function and form to enrich everyday experience.
@markusjohanssondesign   @oblure_official   www.markusjohansson.com 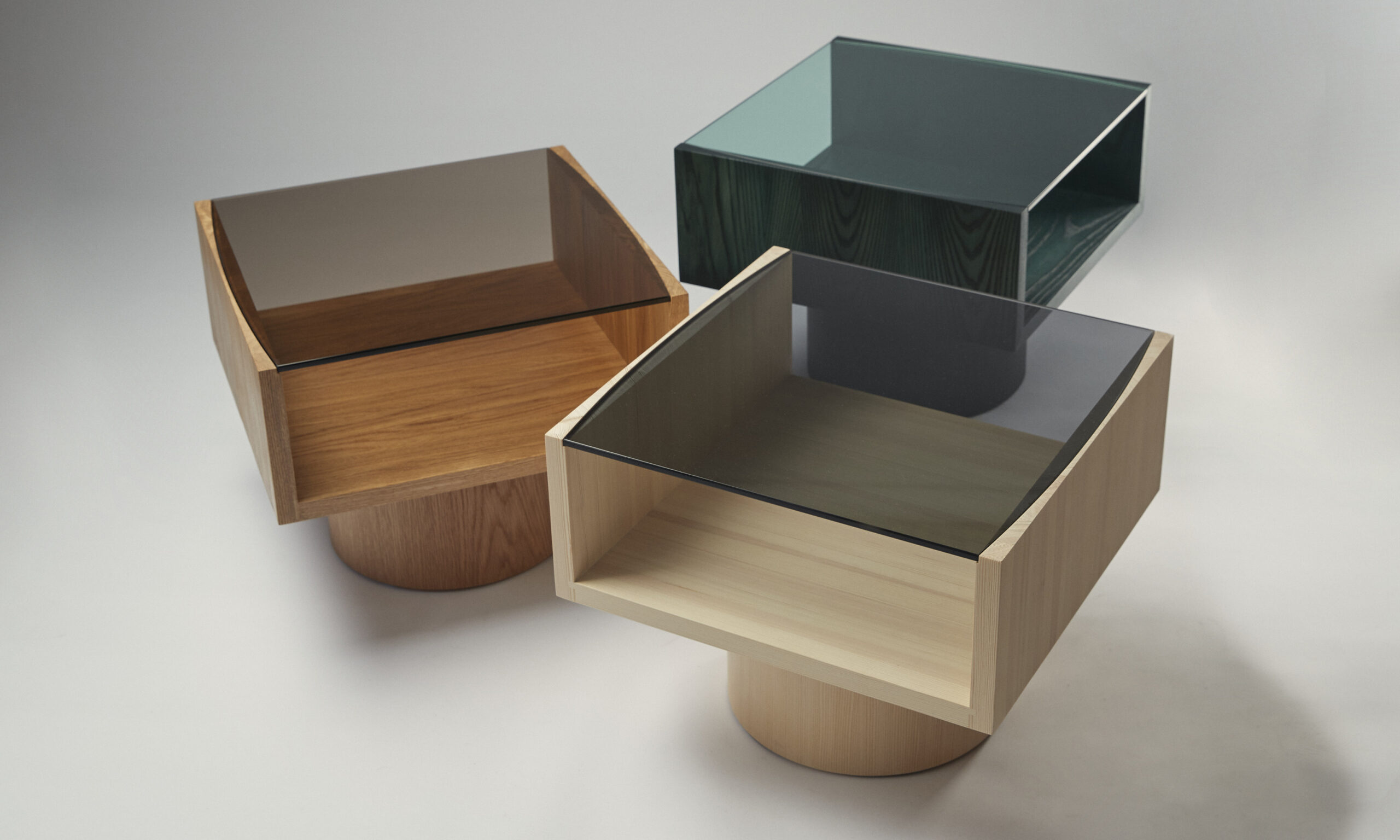 Sami Kallio
Cube Circle
A play with simple shapes, a balance of proportions and color inspired by the deep, green forest with its dark shadows; almost like a painting by John Bauer. Sami Kallio Studio was founded in Gothenburg Sweden by carpenter and designer Sami Kallio, 2011. Details characteristic to the studio emerge through unexpected meetings between materials and traditional craftsmanship techniques such as compression moulding and woodturning. The studio has created iconic pieces for &Tradition, Fredericia, Gemla, and Northern among others. You have to take responsibility for what you create and communicate!
@sami_kallio_studio   www.kallio.nu 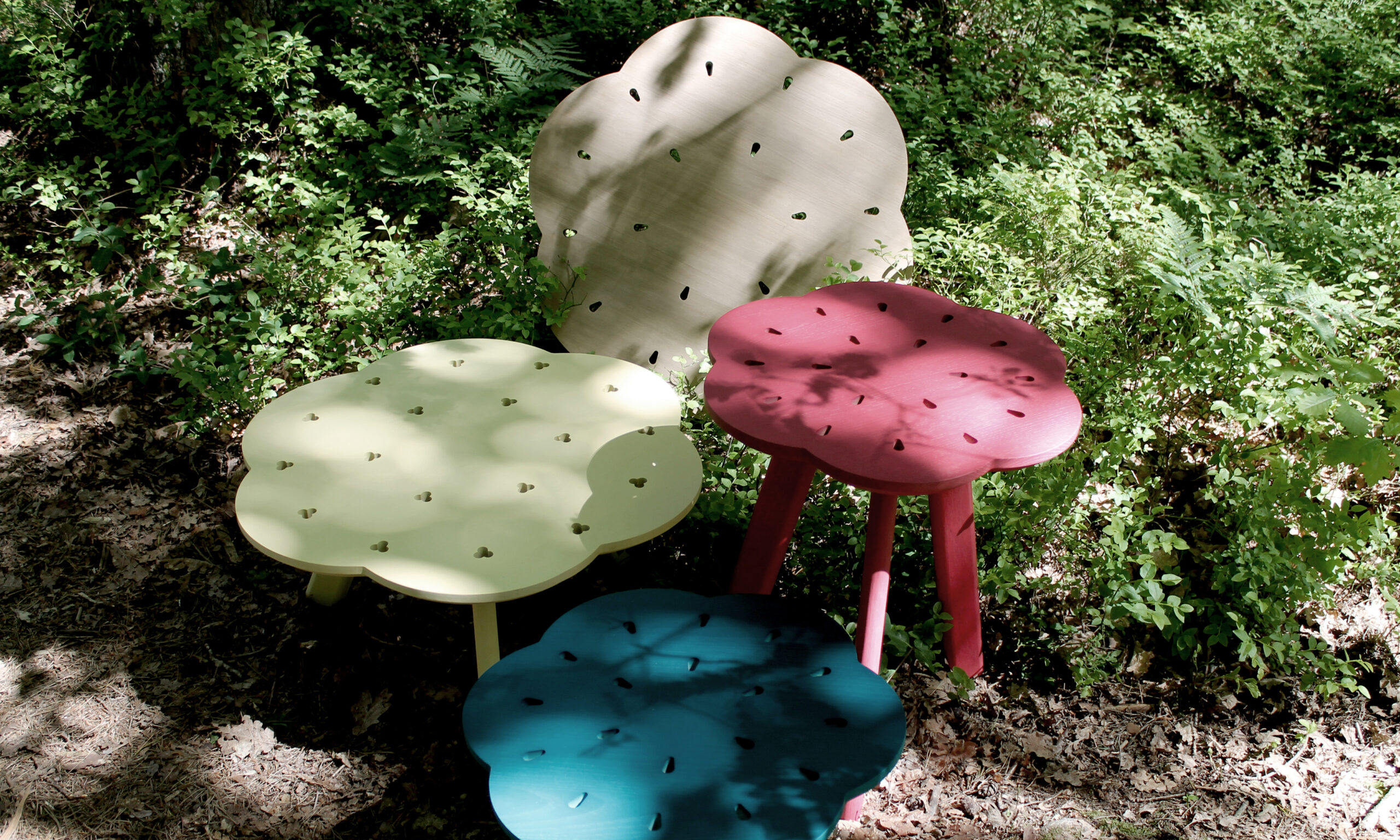 Ulf Linder
Hana
Hana is a table series inspired by Japanese forms and Anime culture. It is both a contrast and an inter- play between old Swedish wood tradition and new technology, such as CNC milling. The table series is intended to be well suited for both public and private environments. With the right material it can also be suitable as outdoor furniture.
The design philosophy is to combine function and poetry in a minimalist expression where the end result should be able to retain value over a long period of time and be easily used for several generations.
@studiolinder   www.studiolinder.se 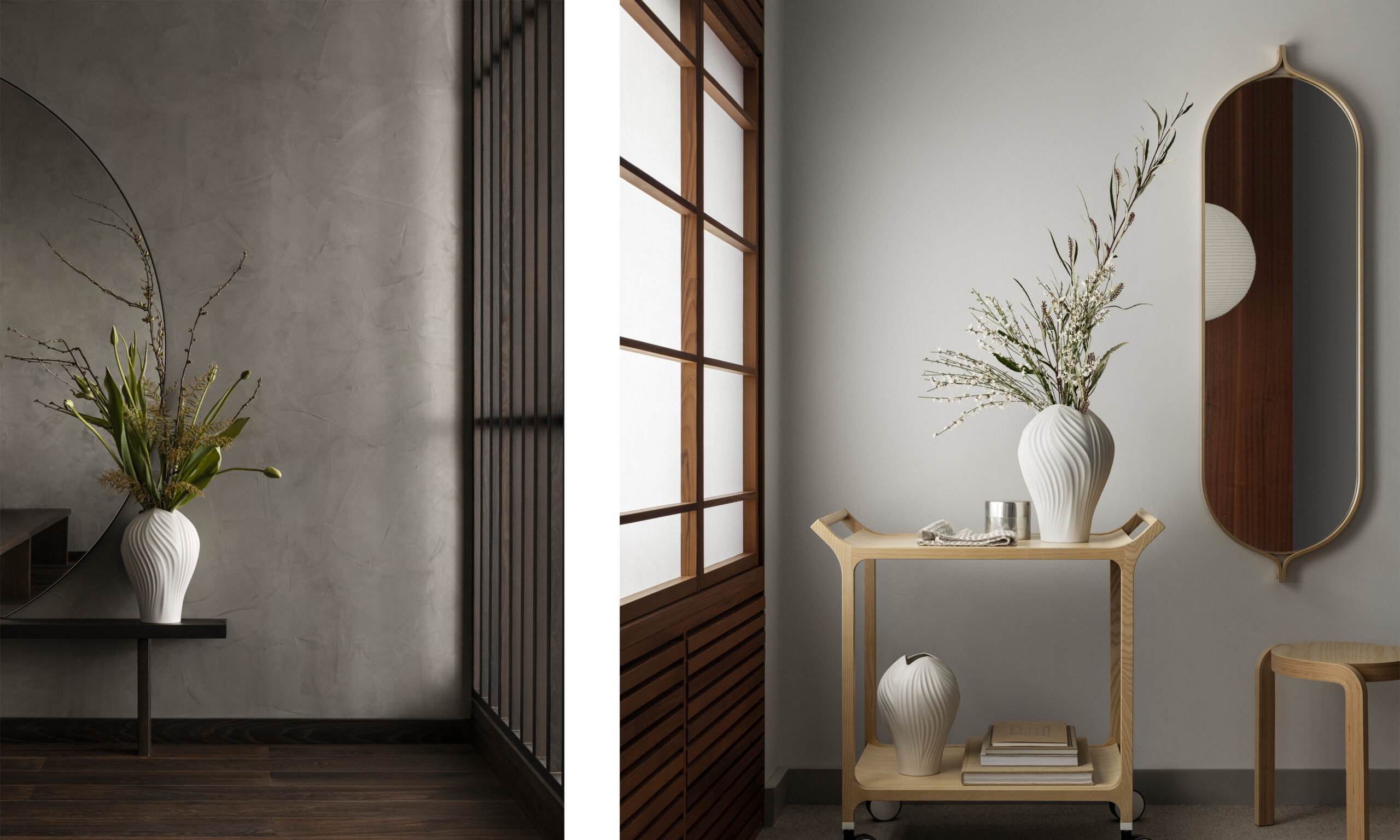 Anna Elzer Oscarson
Anna
The vase Anna, designed for Swedese, was inspired by the transience of nature, Karin Boye’s poems, and a desire to visualize the signs of spring budding to new life.
”The things surrounding us affect and move us, whatever they may be. The faster the world spins, the greater becomes our need for enrichment and inspiring environments; calm places where we can find strength to meet the rushing world outside.” As a designer, I am responsible for the messages my designs convey. I want to carefully craft beautiful things that are worth keeping for a lifetime.
@annaelzeroscarson   www.aeo-studio.com 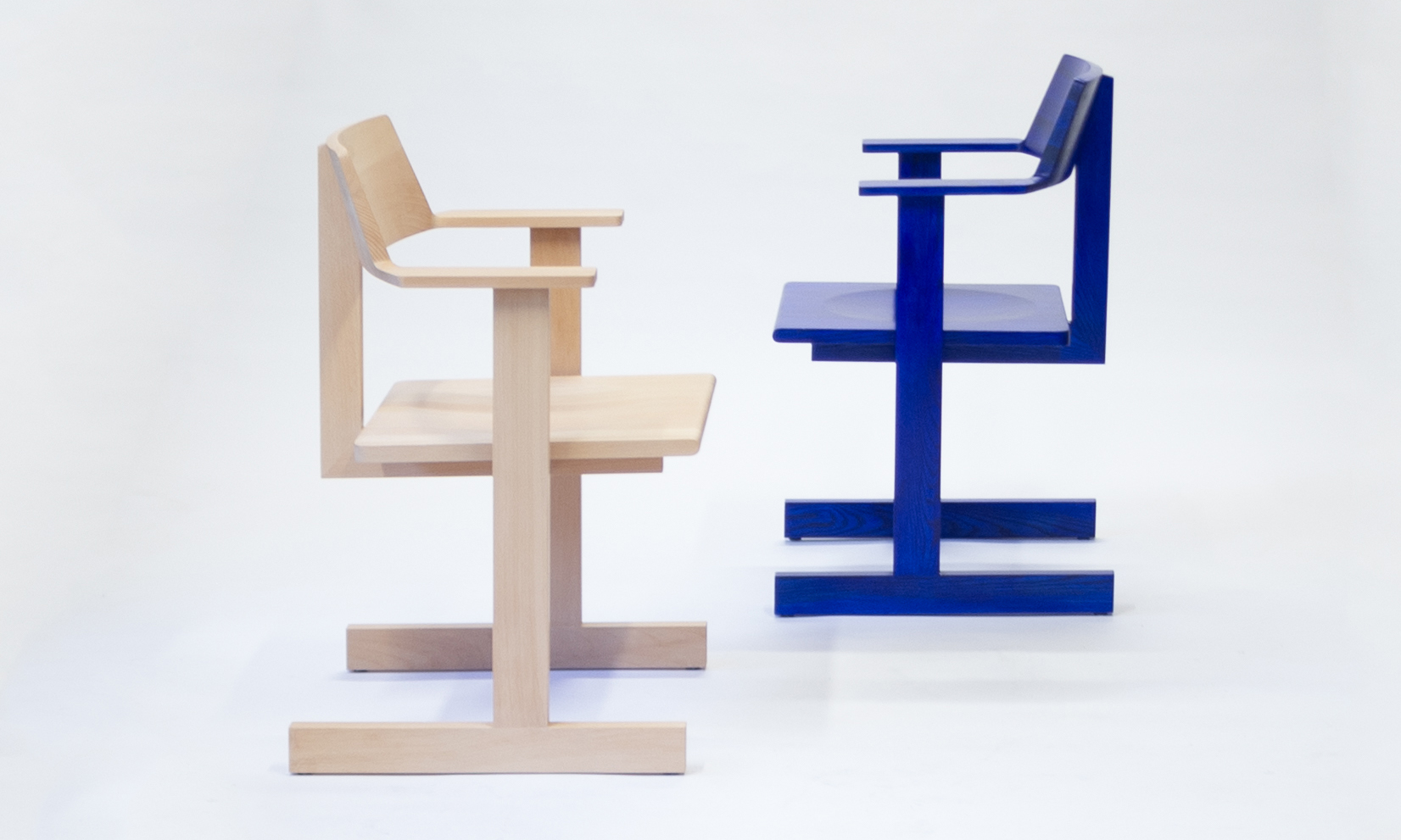 Hampus Penttinen
Aarne Chair
My designs typically revolve around the play between the familiar and the unfamiliar. The designers dilemma is that we need to accumulate knowledge in order
to construct and share our visions with the world, while at the same time maintaining the open outlook of somebody that does not have that knowledge. Without the first part, nothing is concretized; with- out the second part, we cease to be pioneers of that which is beyond our own knowledge. And beyond our experience is precisely where the new is hiding.
@hampuspenttinen   www.hampuspenttinen.se 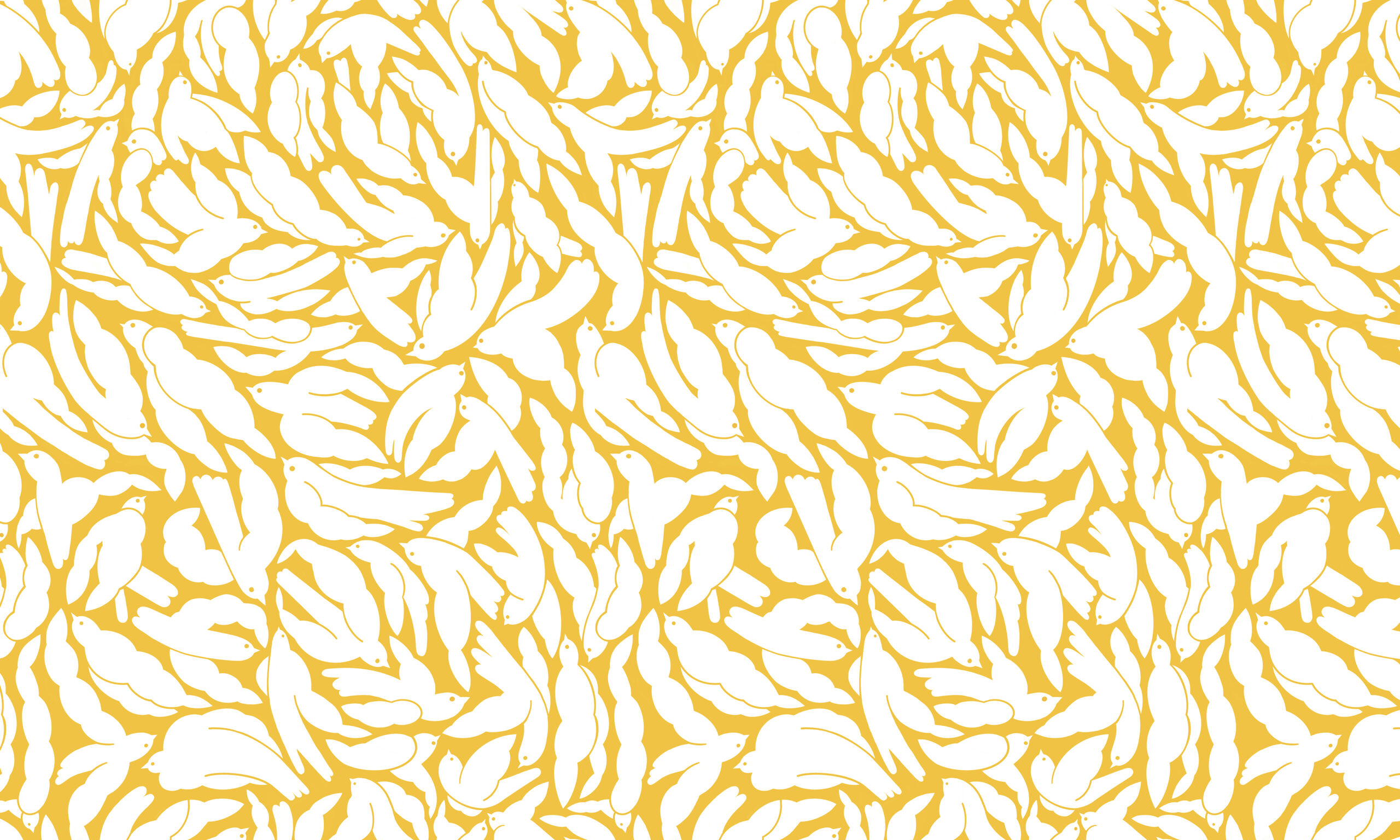 Cecilia Pettersson
Flight
”On the coast on a summer day, the birds are flying around me in formations, almost looking like clouds. Are they going somewhere or looking for something?”
I am a pattern artist. I am most interested in drawing things that grow. The more intricate they are, the more I enjoy them. I have a passion for details and symmetry, and what excites me most is when I need to resolve a challenge, a tricky composition, or an idea.
I am totally obsessed with patterns, and I am fas- cinated how a minute repetition can engulf a large surface. I collaborate with all kinds of manufacturers when it comes to pattern and print. I love a new challenge!
@cecilia__pettersson   www.ceciliapettersson.se 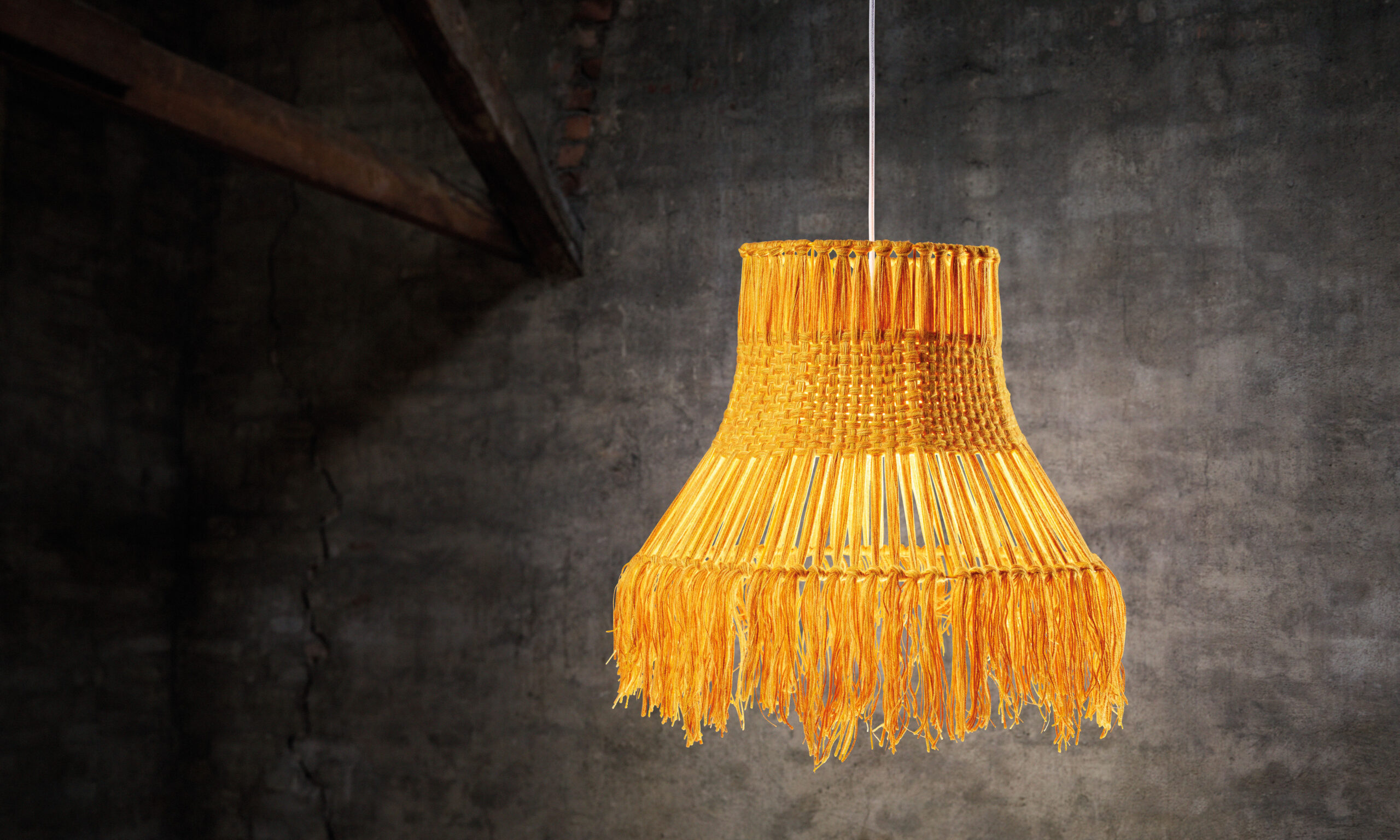 SKRYTA Lill Sjöberg & Maria Zeilon
Happy Waste
It’s not just any lamp… it is material that has been given a second chance in the hands of someone outside the labor market and whose creation ended up in a conscious design space. It is a journey that creates unexpected value for the environment, the individual and society.
SKRYTA develops handmade lamps with their own ID-number and transparent production. Outside Sweden, they are well-kept secrets, yet they hang in award winning interiors in Europe. HAPPY WASTE was tied by Gule who is a work trainee with the City Mission in Gothenburg and is made with leftover materials from Kasthall’s rug production.
@skryta   www.skryta.se 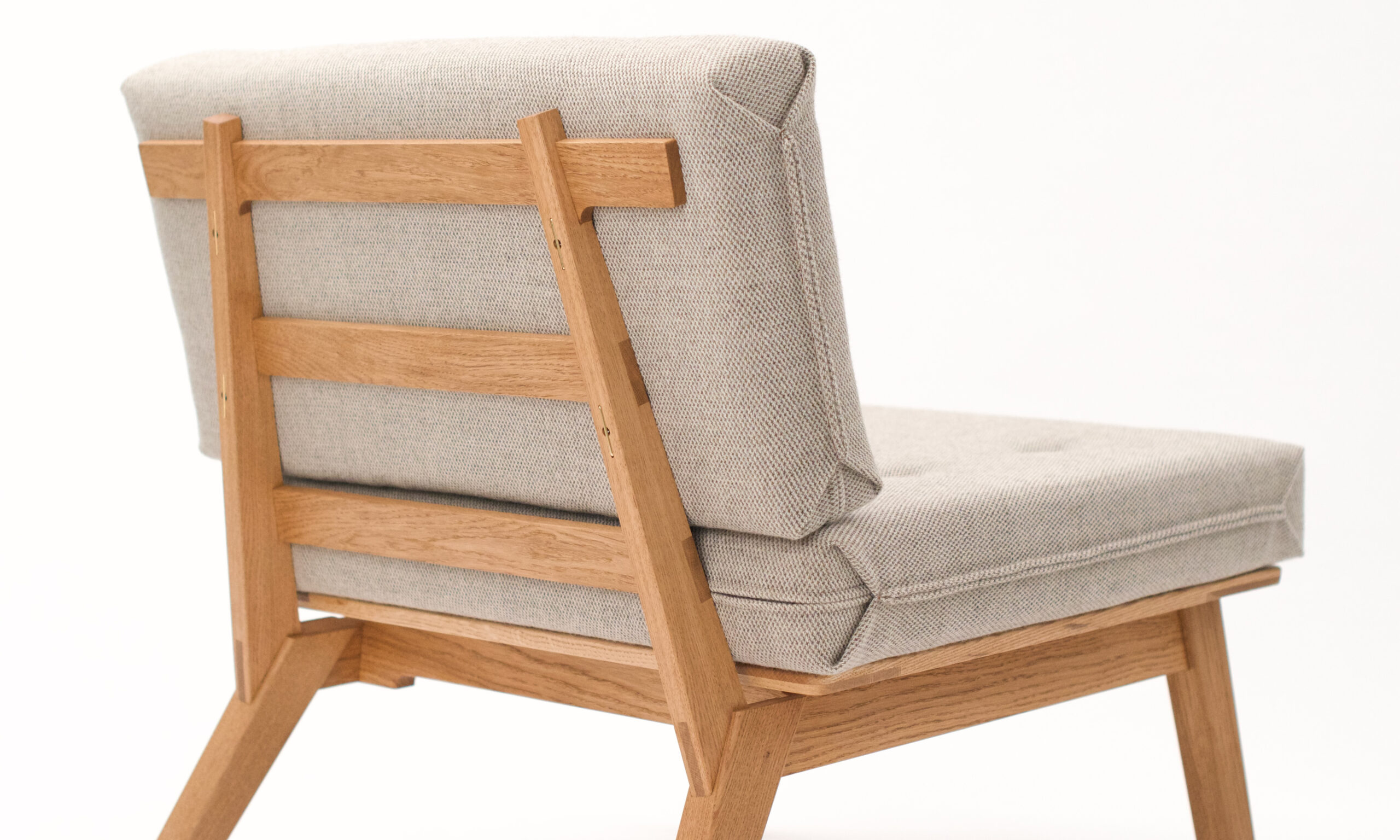 Jakob Tangen
Halvö
Romanticism often guides my decision making. It is easy for me to be romantic about specific things like peninsulas. It’s as if the land wanted to reach out into the water to feel its ebb and flow. Like a peninsula, Halvö is exposed to the room; accessible from three sides, and low; not breaking up the visual space around it. When designing Halvö (Swedish for peninsula) I imagined sitting with my legs crossed, watching cold pacific waves crash onto the shore. In one way or another, all of my designs make me excited about nature and the origin of the materials we use to make things. Halvö is designed for and produced by Möbelverket in Gothenburg.
@jakobtangen.design    @mobelverket_furniture    www.mobelverket.se 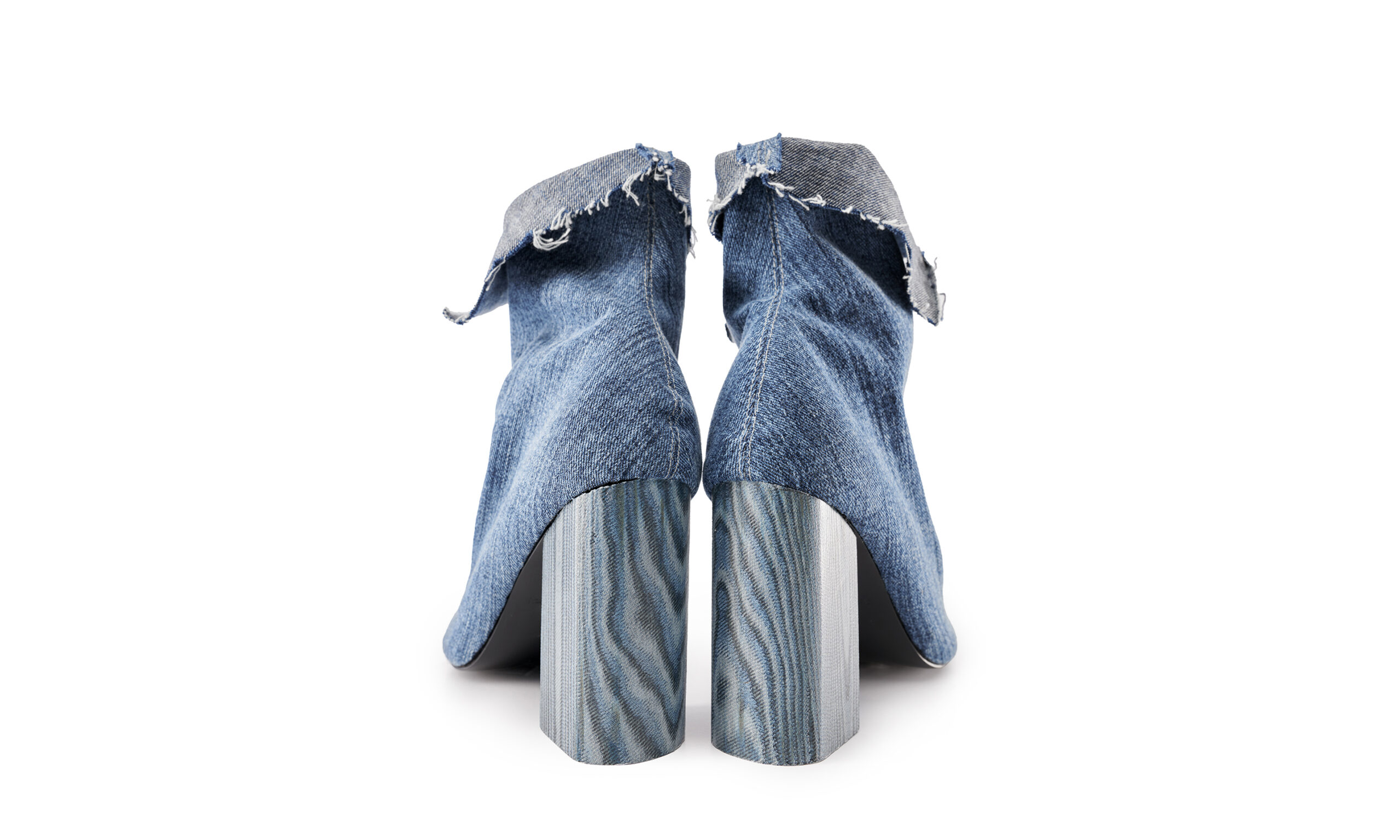 Lill Sjöberg
TWOOD
”Poetry of waste” was an artistic project that explored the possibilities of recycling jeans with the goal of keeping the aesthetic value. The result turned out to be a material innovation. And so began the story of TWOOD [textile wood].
TWOOD is a conceptual material in the space between textiles and wood. It is a tribute to the mythicism and aesthetics of denim culture, but also a contribution to a circular future.
This research, which has been going on in secret for years, has opened up and revealed endless possi- bilities. It is based on the concept of circular design but also on the BUD principles of Satish Kumar.
@twood_sweden   www.twood.se

Svensk Form Väst is the Swedish Society of Craft and Design in Western Sweden. It is a regional association within Svensk Form and aims to strengthen and promote the design field in the region, at home and abroad. Svensk Form is a not-for-profit membership association. Our vision is ’A better life through good design’. Increasing knowledge about the benefits of good design to the development of society has been the key theme for Svensk Form throughout its history.Contact:
Anna Elzer Oscarson
Project Manager, Svensk Form Väst
Email: vast@svenskform.se
Phone: +46 708 400850
Instagram: @svenskformvast 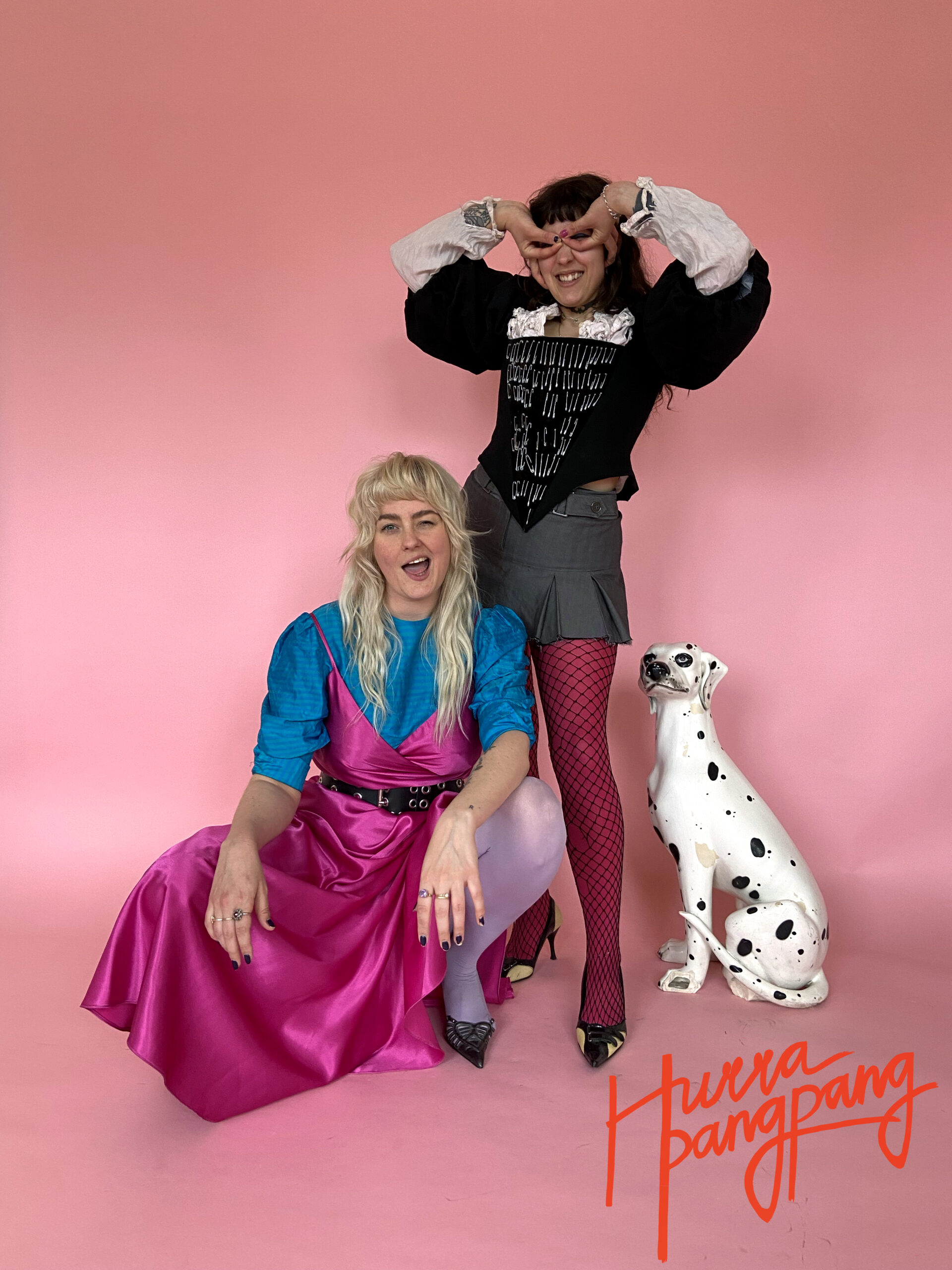 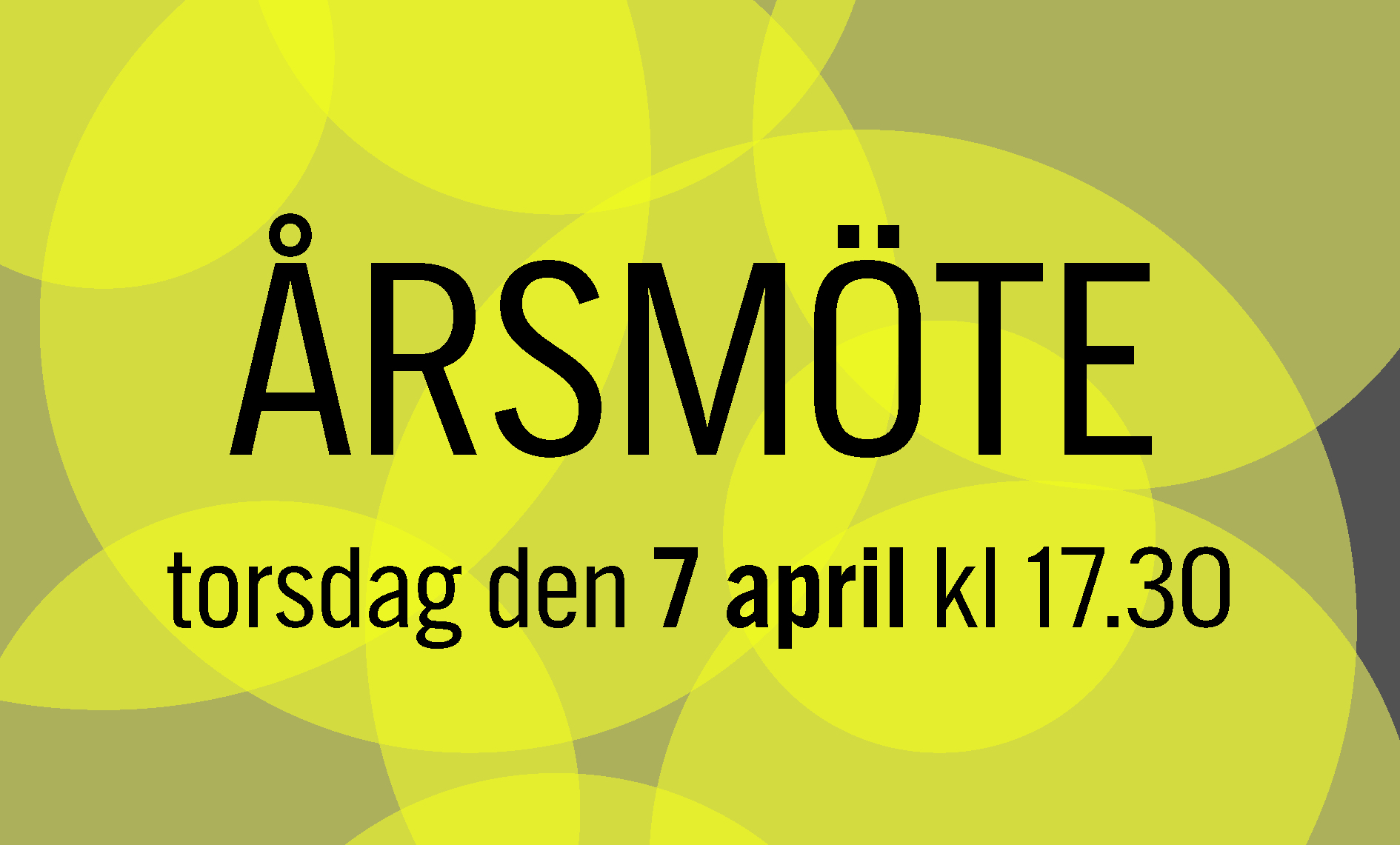 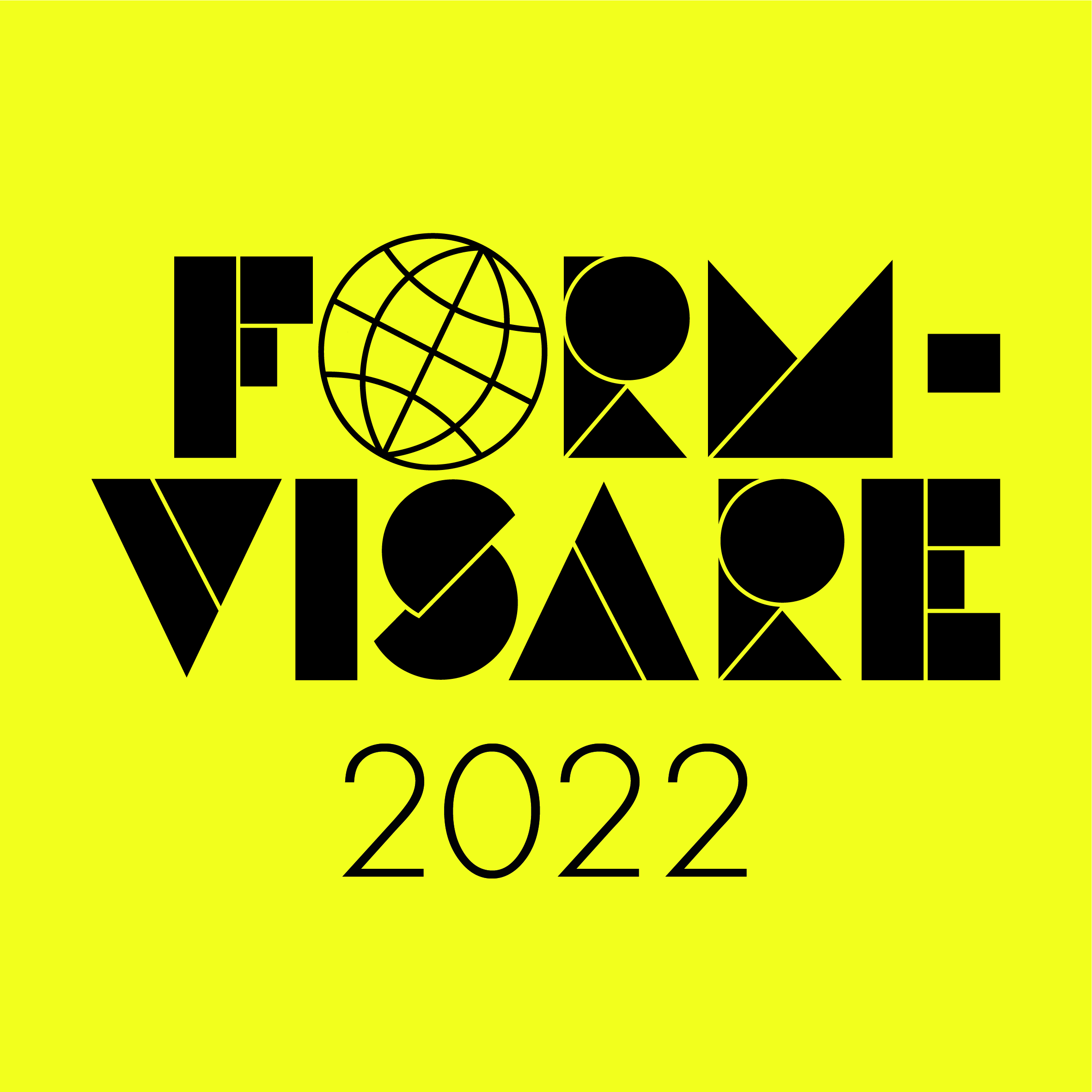 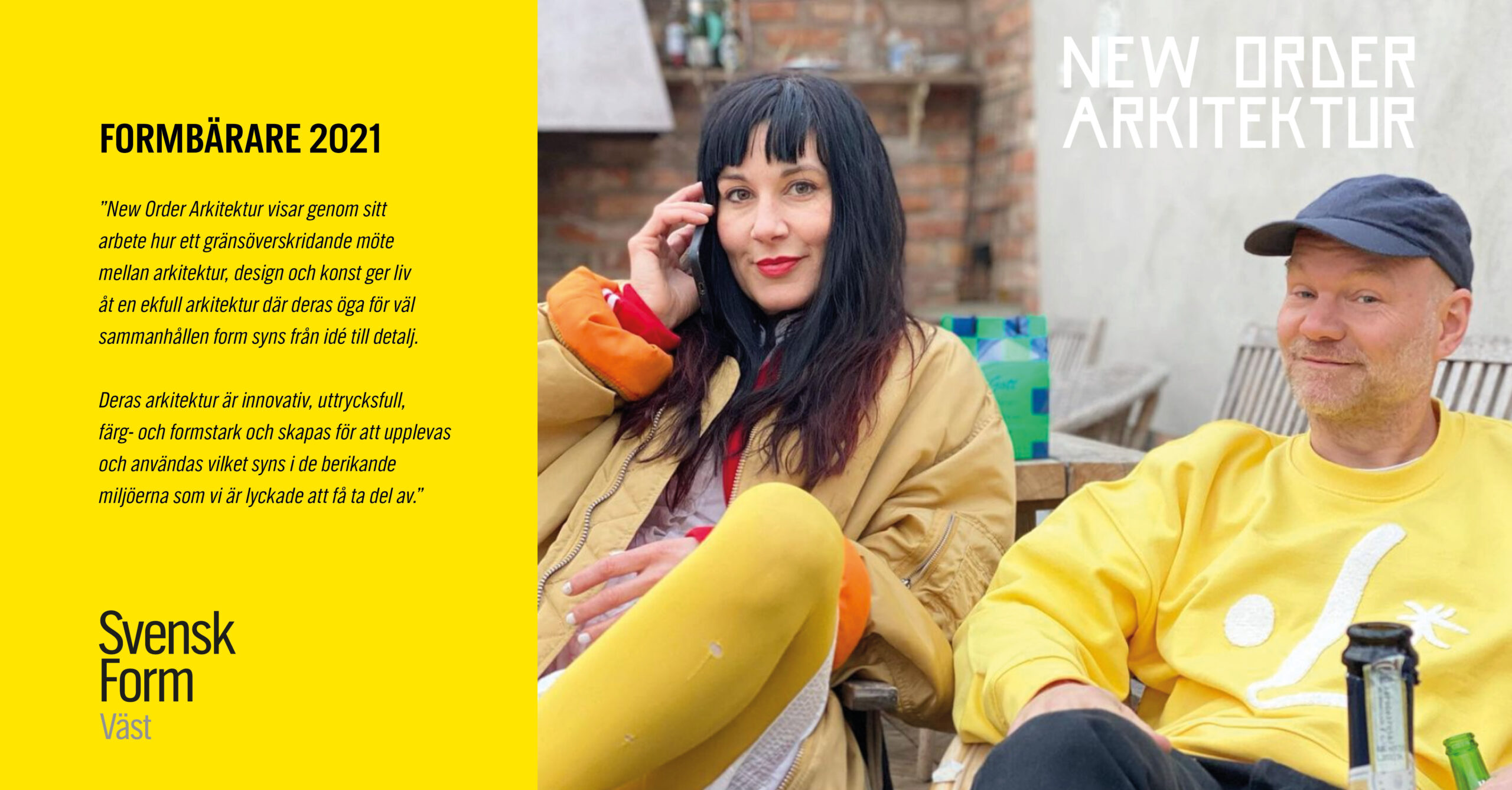 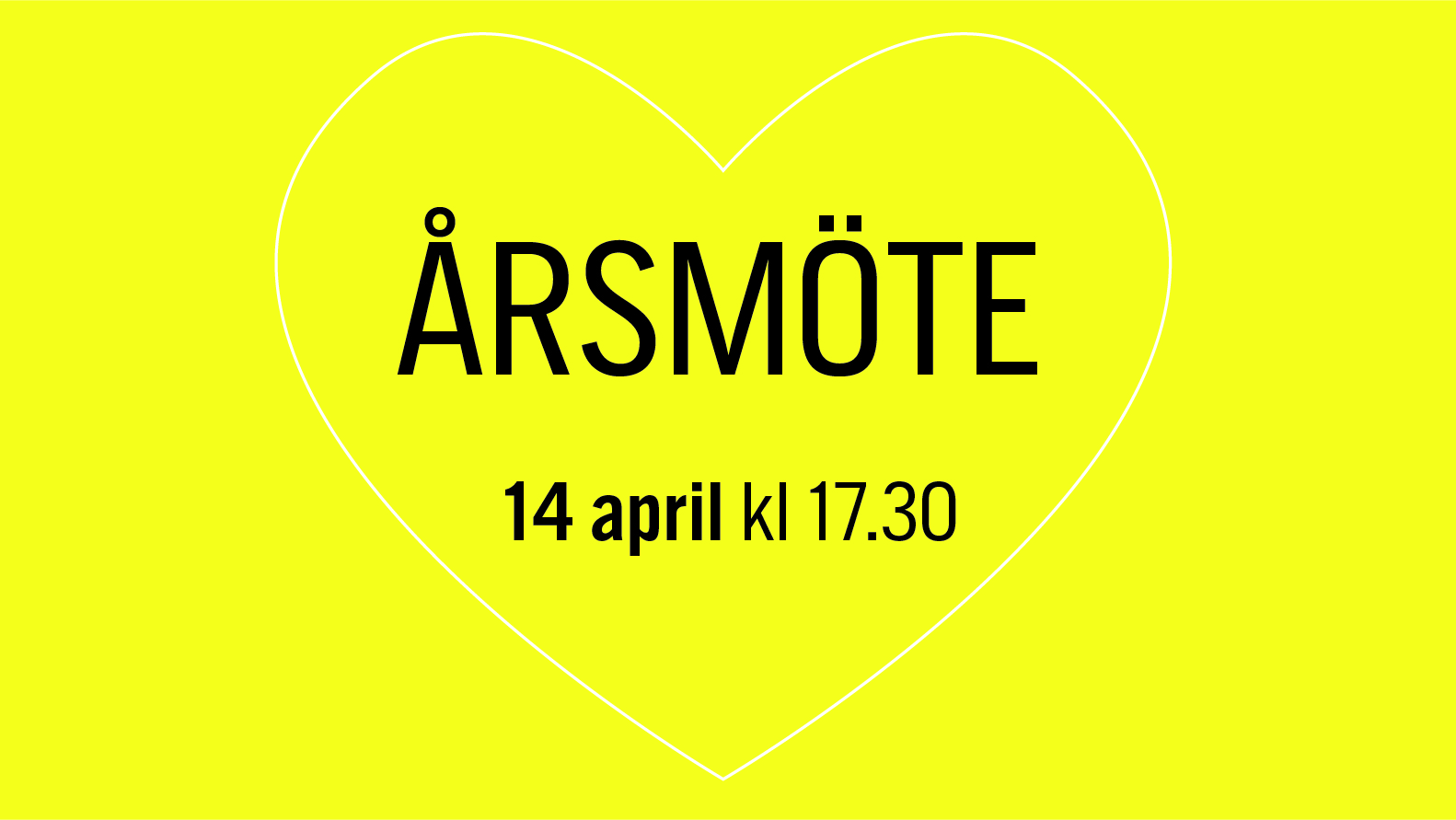 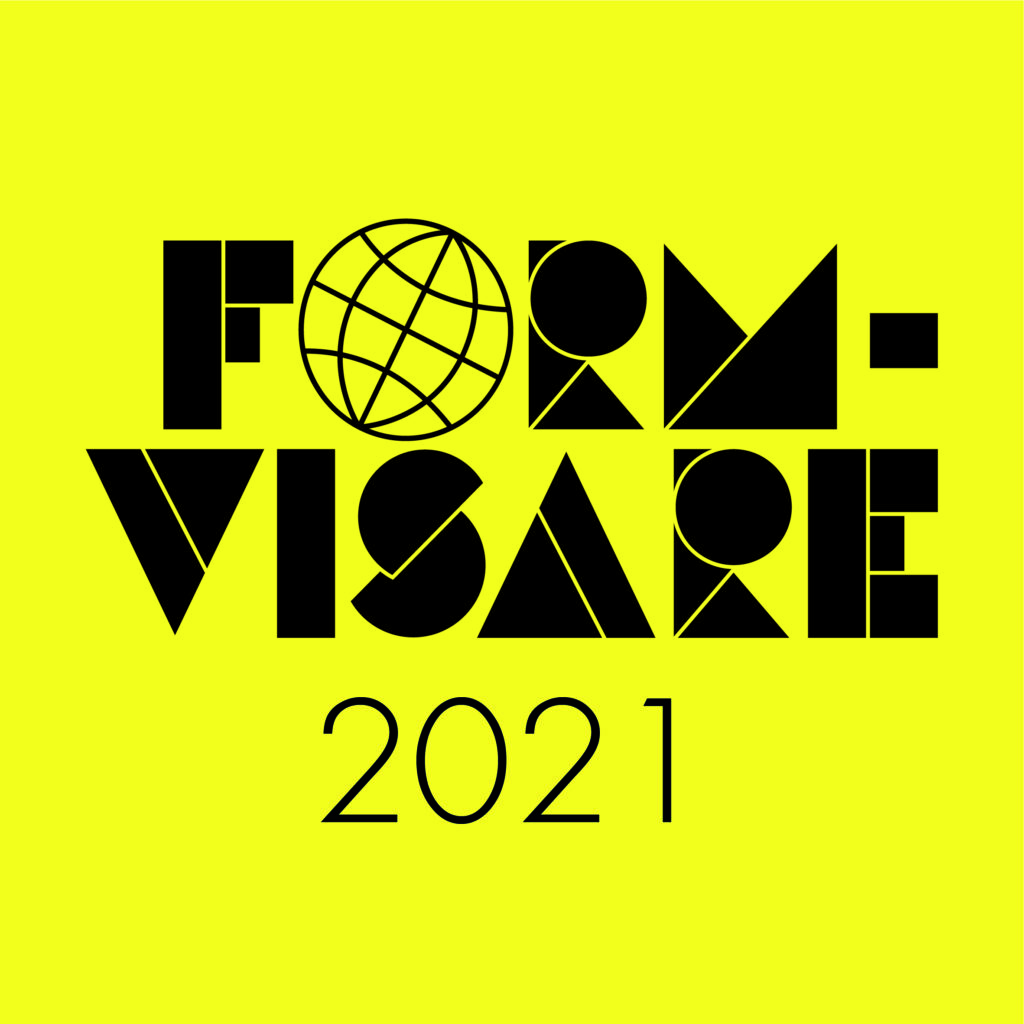 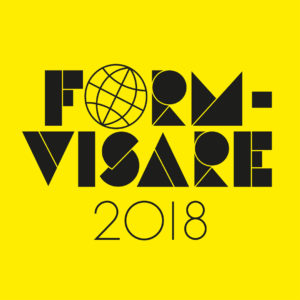